St Catherine's Monastery in Sinai. Arnold Montanus, actually Arnold van den Berghe (1625-1683) was a Dutch theologian, historian, author and publisher. His father Peter Montanus was related to the Hondius family. He worked as teacher for ancient languages and was involved in the publication of some geographical books and atlases with Jodocus and Heinrich Hondius. Arnold Montanus was rector of a Latin school in Schoonhoven, but was also active as theologian and philosopher publishing several writings. He also developed a passion for travelogues on faraway and foreign countries. Thus, besides works on clerical history and theology he soon wrote treatises on peoples and culture of the New World as well as Dutch overseas history especially in Japan. As he himself never left Europe, he was dependent on the assistance of others. So he bought travelogues and information from seafarers and members of the Dutch East India Company. Montanus’ travel books were richly illustrated by fine engravings, for beauty and wealth often compared to those of de Bry. The images did not only depict geographical details but also ethnographic, natural scientific or religious peculiarities of the respective region.The maps are decorated by beautiful figural cartouches, the views are captivating by their vivid ornamentation with ships and local people.

Some corners lightly broken but engraving is perfect. 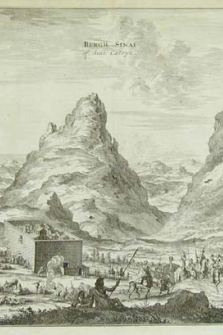